And so, this is Christmas. And what have you done?

My dogs, Max and Lulu don’t like it when we visit my parents house.  They aren’t allowed on the furniture, and at least half the time, my 3-year-old nephew G is there to pull tails and ears and steal toys, and to take all of his Aunt Cori’s attention.  But worst of all, they aren’t allowed to sleep with me in the super-comfy bed that’s one size bigger than the bed we sleep on at home.  Nights with the dogs at my parents house usually consist of me trying to convince them that their crate really is the best place for them to sleep (they don’t have a problem with the crate at my house) for at least an hour.

Last night, it was especially bad.  It seemed like they wouldn’t go down for more than a half hour at a time.  Every time I started to congratulate myself on finding how to get them down, they would start barking at me again.  Maybe they were excited about Christmas.

I guess the only way I tell that story is to offer an excuse in case for when I ramble.  I didn’t get more than four hours of sleep last night, and, if I’m going to stay awake all day to reset my body, I want to do it without chemical stimulation.  Now, if only I could come up with an excuse for the rest of my posts… 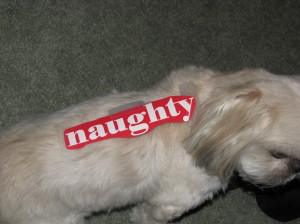 Not a good tag for Lulu to receive on Christmas Eve.

G called Mom & Dad’s house about an hour ago to tell all about Christmas morning at his house.  This kid’s been talking about Santa Claus since, well, last Christmas.  It didn’t help that one of my uncles, G’s great-uncle, told him that Santa wouldn’t come unless he learned to go poop in the potty.  G’s little three-year-old brain turned that into “Santa will only go to places where I’ve successfully pooped in the potty.”  So, random gas station in Minersville, Utah? Yep, Santa went there.  Aunt Cori’s house?  Not so much.  When G had diarrhea a week or two ago, and couldn’t quite make it to the bathroom on time, he was so distraught, not only because he made a mess in his pants, but because he thought it meant Santa wouldn’t come.

So, how did this post about Christmas turn into a discussion of my nephew’s poop?  Oh.  Right.  Back on track now.

G called about an hour ago, and was so excited to tell all about the toys and presents he got.  This is the first year he’s really been old enough to understand Christmas, or, at least understand getting presents.  However, when Mom did ask him what happens on Christmas, the first thing he said was “It’s Jesus’s birthday”, before he started to talk about his presents.

I’ve had a hard time getting into the Christmas spirit this year.  I’m really feeling being single and unemployed. And while I think there is no greater joy than searching out the perfect gift, and seen excitement on the recipients face when they open it, my unemployment checks are half of not enough, and I wasn’t able to get the things I wanted to give this year.  When I get depressed, my thoughts get scattered, and I get frustrated easily, so making gifts was also out of the question–not to mention that it’s often times more expensive to make a gift than to buy one.

It was therefore, refreshing to talk to G this morning.  To hear his child-like joy, his excitement over the gifts he got, and, more importantly, how hard it was to keep him on topic of his presents reminded me of what I posted a few days ago.  Christmas is about children, family and sharing love with others.

And spoiling my nephews rotten.