After I had gone to bed last night, but before I fell asleep, I was thinking about what I wanted to blog about today.  I had two or three good ideas–but I was too tired to jump out of bed to write something.  Of course, this morning, I couldn’t remember any of them.

The head cold is still kicking my butt, and despite what weather.com says, I think it’s starting to be taken over by spring allergies.  All I know is that it is way too early in the year for my nose to be this chapped.

Spring seems to have decided that it wants to stay, I’ve been hearing meadowlarks and red winged blackbirds in the morning, and have been watching a sparrow build its nest in one of my neighbors dryer vents. 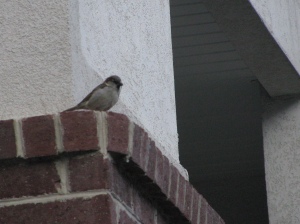 it's hard to see, but he has a bit of grass in his beak.

I’ve been turning the heat off during the day, and opening the windows to air things out.  My downstairs neighbors already have their air conditioning running. (I wonder if I should be concerned about what they are doing, they get even less sunlight than I do, and I’m freezing to death, and they’re running their air conditioner.  I’m just glad I don’t have to pay their electric bill)

So what have I been doing this fine spring day?  Have I been out enjoying nature?  Have I been getting my patio garden ready? Have I been following the instinct that women have had since we decided that we had enough of sleeping outside and moved into caves, and been deep cleaning in preparation for the warmer months?  Yeah, not so much.

Although I did plant some johnny-jump-up pansies a few days ago.

I’ve pretty much been laying alternately in bed or on the couch, chained to a box of kleenex, and trying to convince one dog or the other to lay on my lap in such a way as to act as the perfect heating pad, and trying to overcome the fact that Oprah and I have very different tastes in literature.

This is usually my favorite time of year, when the first signs of spring appear, and the days start to get longer, but before allergies come.  This year–well, granted, it’s only been a few days, and I am sick, but not so much.

I did finally get my Christmas lights down, though.