I actually went to sleep at a decent time, then woke up when both dogs, having been “mysteriously” forced off the bed by someone who is an active sleeper (whoops) started barking at me to let them back on the bed.

I then decided that I wasn’t going to go back to sleep, because of the heartburn, and the runny nose, and the general lack of sleepiness.

That’s okay, I’m a hypochondriac, and have the medicine collection to prove it.

Now, even though I’m a hypochondriac, I don’t like taking any more medicine than I strictly have to(hence my problem “forgetting” to take my anti-depressant).  So, zantac (or the generic version thereof) for the heartburn.  I’ve known for a while that most sleeping pills contain the same medicine as benadryl (or the generic version thereof) so I compared labels, to figure out if I wanted to take an allergy pill or a sleeping pill.  This is what I discovered:

Granted I don’t really know why, I doubt I paid more than $3 for either bottle of pills, and they each came with 100 capsules.

Just to make things absolutely clear as to the label for both of those bottles: 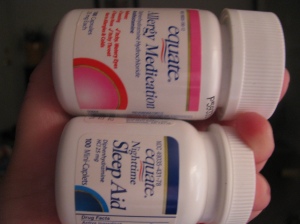 For the record, the sleeping pills won, just because they’re smaller.  And now I’m sitting here with the jingle from the Friskies commercial where you get a cat’s eye view of a catnip trip stuck in my head (you know the one) waiting for it to kick in enough that I can go back to sleep.