This semester, I’m taking a photography class. It’s one that’s required for all art majors.  I took it this semester because over the summer, I had a class with some photography majors, and they told me that UVU was switching the Photography I from a film class to a digital class. I wanted to take film photography, because I knew I could borrow Dad’s fancy film camera, but my little digital camera probably wouldn’t work for the class. The course catalogue for this semester listed Photography I as a film class, but on the first day I learned that the switch had already happened.

Drama ensued. I can’t afford a new camera, and doing research on the dSLR camera‘s I could afford I discovered that they shot in a lower resolution than the camera I already have.  So I hunkered down with the instruction manual, and the syllabus, and discovered that my Canon Powershot SX100is would probably work–I emailed my instructor and she agreed, though she was concerned when she actually saw the little thing.

Anyway, my class is on Saturday.  Which I actually think works, because it gives me the rest of the week to do the assignments. It’s hard going to school six days a week, but I’ll get though.

The assignment for this week was color–simply to take two colorful photos that would work well together.  Of course, no photographer worth her salt would stop at just two, so here are my favorites:

I was trying to get a good contrast between the red of the blanket, the yellow and blue of the dog bed, and Lulu's white fur. It never really worked that way. I think this looks like Lulu's eavesdropping on the downstairs neighbors. 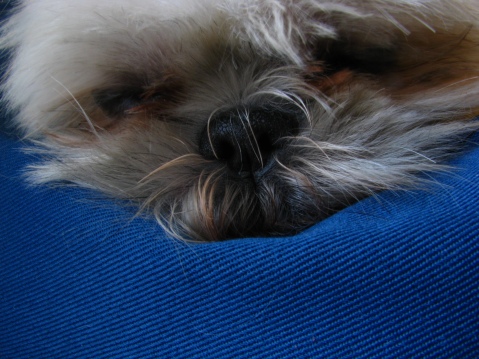 I LOVE this picture, I just couldn't find something to pair it with. Sure, it would have worked with the last picture, but I wanted two different subjects. Max was being even less cooperative that Lu was about the whole photography thing.

This is a basket Mom has. It's woven into a diamond pattern, alternating the red and green. I took other pictures where the pattern was more clear, but I liked this one the best.

These next two I almost turned in–in fact, I had turned them in, but we had a break before we got to my review, so I changed my mind, and substituted another pair.  I think they’re well done, but they’re not my aesthetic, and I didn’t want to put them in my portfolio at the end of class.

So the whole "something delicate juxtaposed with something hard and rusty" is absolutely not my aesthetic. Still, I'm a little obsessed with this old horse trailer (the blue thing) that lives behind my complex. This was taken during the golden hour in the morning, and I love how the sunflowers are glowing.

this truckbed-turned-trailer lives next to the horse trailer in the last picture. This picture was taken half a dozen times before I managed to get there in the golden hour in the evening. While I think pictures of rusty metal are so overdone, I love the lines in this picture, and the glow of the trailer. 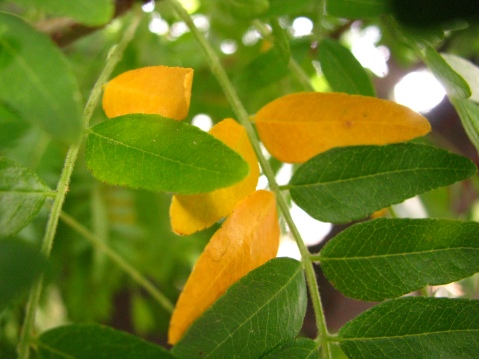 So, fall's here. Or almost here. Or something. I couldn't find any leaves that had changed color all the way--not that I looked very hard--so I settled for my parent's honey locust tree, where the leaves were just starting to change.

"Color" kinda turned into "lighting" for me. And I had a lot of fun playing with the shutter speed on my camera. This was taken by setting a 6" shutter speed (while the car was not moving, naturally. This was dangerous enough, and I tried to be smart-ish about it) then propped up on my dashboard while I was driving an empty stretch of road. I like how the yellow roadsign and the yellow stripe in the road come together. I kinda wished I was following someone, so I could get red tail-lights, but I think just the yellow, black and white work together.

So you know how I said that "color" kinda turned into "light" for me? Yeah. This is one of the pictures that I ended up turning in. I was mesmerized by the way the blue screen reflected on the desk with the computer. I'm really happy with how this turned out. 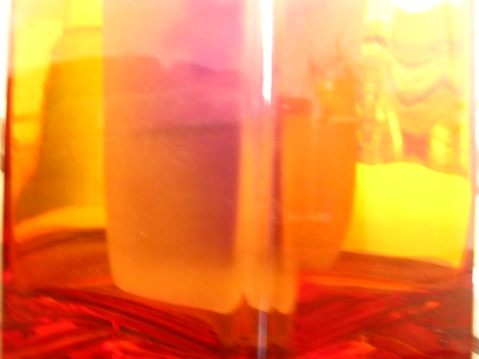 Last week, we looked at some abstract photographs, and I was intrigued by the notion, so I attempted some myself. This is a vase, a drinking glass and some ribbon stacked inside of each other--and the other photograph I turned in. It's blurry, but that was by choice--I wanted the focus to be on the colors, not any of the objects actually used. My instructor was worried about my camera after seeing this picture, until I showed her some of the others that I took this week.

So as far as color goes, I think I did well. Next week, we’re talking about composition, and taking a photography field trip around campus