My sister is always saying that she wishes I could put a “like” button on my blog.  Sis, I looked, but I don’t like the options that WordPress has.  I have learned, though, that I can automatically have my blog posts post directly to my Facebook wall, and, if I did everything correctly, this should be the first post to do so.  Of course, now, you do realize that you are now under obligation to click the “like” button for all my blog posts from here on out.

Today is my Bro-in-law’s birthday.  I was feeling sorry for myself a few days ago, so foolishly I volunteered to babysit while he and my sister went on a date to celebrate.  Of course, it couldn’t just be for a few hours in the evening.  He wanted to meet with his family for lunch, then take my sister out on the town tonight.  E is sick and had been fussy all morning, so I watched him while my sister took G on a picnic with the bro-in-law.  When they got back, I insanely suggested that G and I take Lulu, Max, and G’s dog Polly to PetSmart.  There’s at least four things in that sentence that would prevent a peaceful trip.

Actually, it wasn’t that bad, at least, once I got the kid and the dogs loaded into the car, and they all figured out where they wanted to sit. Before that happened, though, I said out-loud to myself, “I’m crazy to be doing this.”

G heard me, and answered, “Don’t be crazy.”  That’s the best advice I’ve ever gotten. G also kept insisting “Polly is my dog.  She needs to sit next to me.”  Well, next was a good idea.  Polly though she needed to sit ON G.  I should probably mention that Polly is a mostly corgi mutt–about thirty-five pounds.  G is tall, but really skinny, and weighs in at about 40 lbs.  Polly thought that G’s car seat made a great step to look out the window on the way to the store. Fortunately, G thought that was hilarious.

When we got to PetSmart, G insisted on holding Polly’s leash.  I was leery, because I know that Polly is stronger than he is, but I also know how good she is with him, so I let him keep track of her.  They were so cute together.  They would run up and down the aisles together, and 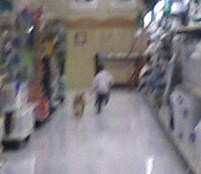 when I lost track of them, I could call “Here Polly!”.  Polly, as she should be, is more loyal to G than to me, so she wouldn’t come, but she also wouldn’t budge from wherever she happened to be until I found them.

I took a picture, but the camera on my phone isn’t very good, and they were about 20 feet ahead of me when this picture was taken.  Still–can’t you just see how much these two enjoy spending time together? And fortunately, the drive back to G’s house involved much less three-year-old being squished by a dog.

A few hours after I got back from the store, my sister went to pick up the bro-in-law from work, then go out to dinner.  I stayed to watch the hyperactive ball of…hyperactivity that is G, and the sick baby.

This is where the title of this post comes in.  My sister is a superhero.  She takes care of G and E all day.  Every single day.

The more I thought about it, the more I decided that ALL Mommies are superheros.  Especially the Mommies who don’t get enough or any help from the Daddies, and/or have to work all day at a job, then come home and take care of the kids. A single day watching those two–and half the time I only had one of them, and I’m worn out, and asking myself why I want one of my own.

I grumble about Max and Lulu being four-legged two-year olds, but I can also count on them to fall asleep after 20 minutes of hyperactivity.  Or lying around doing nothing.  Whatever.  I can also leave the house when they get to be too much, and not worry about them.

So, yay for Mommies!  Yay for Daddies, too!  Yay for all those who selflessly give of themselves to make this world a better place, for us and for the future generations!

Apparently, I didn’t do the Facebook thing correctly, because my blog isn’t showing up there.  Oh well, I’ll keep working at it.  Sooner or later, I’m bound to figure it out.